Here to read about neutral density articles? This article on day time long exposures also might be of interest. The best purchases I have made for my camera, have been the Canon 10-22 and my Cokin graduated neutral density filters. I thought I’d just touch on how come they are so handy and how sometimes the viewer may be mislead into thinking the shot may of required alot of editing to achieve that effect when realistically it was achieved in-camera without photoshopping. As you can see with the second shot above, the filter adds mood to the sky whilst the land is properly maintained and not as under-exposed as the sky may be. Such appeals to landscape photographers so they can properly under exposed their foreground subject whilst the sky is not affected and doesn’t become washed out. Below are a few recent examples of when the filter has enabled me to get a shot with ease without having to worry about fixing the shot in photoshop. Speaking of which, I find the filter minimises alot of photoshop work and usually my photographs only require minor sharpening and other minor adjustments which save time and is how photography should be (That could open a can of worms..) 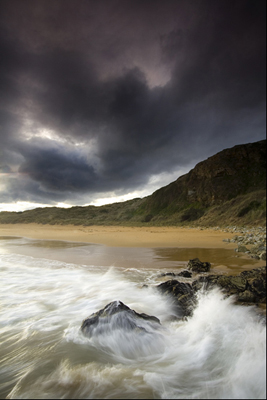 One thing about each shot above is that the foreground (land) is not overly dark and the viewer can see the detail on the rocks. If the shot was taken without filters and for example the sky was exposed then the land would be very dark and would not retain detail. The same would apply if the land was exposed and as a result the shot would not have the sky as you see in the shots above. Instead the user would have to compensate and aim for a darker image so the sky was not blown out (under-exposed) whilst the foreground was somewhat exposed. This leaves the image being quite dark and advanced users consult photoshop through exposure stacking.Photoshopping the sky to make the exposure look more natural is a completely different story. For anyone wondering I’ll quickly explain how I would maybe do this (I haven’t done it before so can’t comment from experience) but here goes

But when dodging or doing the above be careful not to bring the area out too much. I’ve seen countless photographs where the scene is quite dark because the sunset has just finished but then there is rocks in the foreground which look like they are exposed with 1pm sunlight.

But moving on, the equipment I use for these shots can be purchased at bhphotovideo. I use the more expensive Cokin Z Pro which in comparison to the P series, is a little bigger which greater suits wide-angle shooting to minimise vignetting. There are other brands available such as Lee and Hitech but I’ve never seen them so can’t really offer any advice but have heard good reports. The Z-Pro range is worth the extra pennies but I must warn you that they must be treated carefully as I have dropped filters in the past and chipped them.